Skip to content
Published on March 6, 2020 in Categories Fix Issue 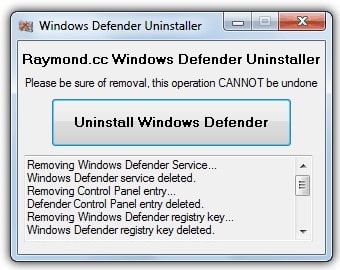 How To Uninstall Windows Defender?

How To Uninstall Windows Defender? If you’re already running a full anti-malware suite, you might not even realize that Windows Defender is already placed with Windows, and is probably wasting precious resources. Here’s how to get rid of it.

Now, just to be clear, we’re not telling you that we hate Windows Defender. Some spyware protection is better than none, and it’s built-in and completely free! But if you are already running this that provides great anti-malware protection, there’s no need to have more than one application running at a time.

Windows Defender is a reasonably solid antivirus app that comes built into Windows 7, 8, and 10. It may not be the best antivirus app in terms of the pure number of threats it stops, but Defender arguably does have a security advantage in being so tightly integrated into Windows and in being well-behaved when it comes to other important apps.

That said, what you use is up to you. Most other antivirus apps are pretty good about turning Defender off when you install them and turning it back on if you uninstall them. It never hurts to make sure, though. Running more than one real-time protection app can cause conflicts and waste system resources.

Run Malwarebytes Alongside Your Antivirus for Maximum Protection

Before you go ahead and disable Windows Defender for good, it’s worth pointing out that these days the really active threats are from spyware, adware, crapware, and the worst of all: ransomware. That’s where Malwarebytes comes in.

Malwarebytes not only protects your computer from malware but does a better job of cleaning up an infected computer than anything else on the market.

And to protect your browser against zero-day exploits, Malwarebytes also includes Anti-Exploit and Anti-Ransomware features, which can stop drive-by attacks cold. And best of all, you can run Malwarebytes alongside your existing antivirus to keep yourself fully protected.

How to Disable Windows Defender in Windows 10

Starting with the Windows 10 Anniversary Update in the Summer of 2016, Windows Defender can actually run alongside another antivirus app. When you install another app, Windows Defender itself isn’t disabled—just its real-time protection component is. That means your third-party app handles real-time protection, but you can still run a manual scan with Defender whenever you want.

If you want to make sure that Windows Defender’s real-time protection is disabled—or re-enabled after uninstalling a third-party antivirus app—hit Start, type “defender,” and then select “Windows Defender.”

In the main “Windows Defender” window, click the “Settings” button in the top right of the window.

You’ll be presented with the “Settings window.” Note that you can also get here from Settings > Update & Security > Windows Defender. Just make sure that the “Real-time protection” toggle is set the way you want.

There is one more thing you should be aware of regarding Windows 10’s real-time protection. If you disable it and have no other antivirus app installed, Defender will turn real-time protection back on automatically when you restart Windows. This does not happen if you’re running a third-party antivirus app. There’s no real fix for this, but if for whatever reason you do want to keep real-time protection off, but we do have a kind of workaround for you. You can simply exclude your entire system drive from being scanned.

Head to Settings > Update & Security > Windows Defender and click the “Add an exclusion” link. Tap the “Exclude a Folder” button and select your C:\ drive.

And if you have additional drives on your PC, you can exclude those, too.

Please note that this is something we don’t really recommend. Excluding those drives is basically like turning off antivirus protection. But, it’s there if you need it.

Disable Windows Defender in Windows 7 or 8

In Windows 7 and 8, you have to completely disable Windows Defender when you want to run another antivirus app. You can’t just disable real-time protection the way you can in Windows 10. Again, Defender should get disabled automatically when you install a third-party app and re-enabled should you uninstall that app later. But it doesn’t hurt to make sure.

Switch to the “Tools” page on the menu, and then click the “Options” link.

Switch to the “Administrator” tab in the left-hand pane, and then toggle the “Use this program” checkbox however you want. When you’re done, click the “Save” button.

Windows Defender then confirms that you’ve turned it off. Awesome!

There are tips floating around out there for stopping the Windows Defender service from starting automatically when you start your PC, and even a complicated process for completely uninstalling Windows Defender altogether. We don’t recommend them. Here’s why.

First, if you disable Defender—or it gets automatically disabled when you install a third-party app—it actually uses very few system resources. There’s really not much point in stopping the service. This is particularly true in Windows 10 where you can disable the real-time protection, but still have the added safety of using Defender for manual scanning as a back up to your regular antivirus app.

Second, if you stop the service—or go through the process of uninstalling it—any Windows update is likely to restore Windows Defender and undo all that work anyway. Plus, Defender takes up very little disk space and there are better ways to free up disk space on Windows.

While it’s handy being able to enable and disable Windows Defender, please do make sure that you’re still running a good antivirus app. Many people will tell you that you can go without antivirus if you’re careful, and that just isn’t true. If you really hate antivirus, Windows Defender is the least intrusive program you can use—so you should probably leave it on.

In fact, we recommend everyone also use a good anti-malware and anti-exploit app like Malwarebytes in addition to antivirus—it’ll help protect you from against exploits and vulnerabilities that antivirus apps don’t cover, which are arguably more prevalent on the web today.

How to Fix WerFault.exe Application Error in Windows 10?